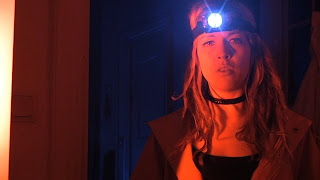 We're currently doing a narrative promotion film for an upcoming thriller novel called Nefilim, written by Swedish writer Åsa Schwarz. The shooting was done in Stockholm at Jan 22, 2008, the picture is showing actress Yohanna Idha as the main character Nova. The first rought cut is currently in circulation in the team. Sten is now doing the second rough cut, trimming down the scenes, adding more sound effects and royalty-free music. To be able to trim down the first scene, we have to return to the location and get some tiny cut-away shots of the hallway. If all is satisfied, we can then go on to the the third rough cut to add all the fancy After Effects stuff together with the last matching sound effects. The whole film will be roughly 3:30 but it will also probably be a teaser version at about forty-five seconds. Small excerpts from the film will then be selected as animated illustrations on the book's web page.
Posted by JumpCut Club Sweden at 10:12 PM No comments: